With Apologies to Ishtar

Ishtar was nominated for Worst Picture in the 1987 Golden Raspberry Awards. The movie received extremely negative reviews, and holds a 19% rating on RottenTomatoes.com. "Ishtar" has since became synonymous with "box office flop". 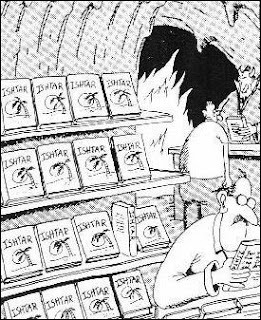 In one of the great Gary Larson's "The Far Side" comic strips, captioned "Hell's Video Store", the entire store display nothing but copies of the movie Ishtar. Larson later apologized, saying "When I drew the above cartoon, I had not actually seen Ishtar. ... Years later, I saw it on an airplane, and was stunned at what was happening to me: I was actually being entertained. Sure, maybe it's not the greatest film ever made, but my cartoon was way off the mark. There are so many cartoons for which I should probably write an apology, but this is the only one which compels me to do so."

More on Ishtar at Wikipedia.
Posted by Emily at 7:06 PM

Emily
Trivia lover and Jason Re fan by night, local idealist and nonprofiteer by day.